Below are some photos from the Bonine House and the Carriage House.

Click the little arrow to start the slide show.

Join URSCC or friend us on Facebook to keep current on our programs and activities.  Thank you!

The album as we originally received it.

In 1847 black and white residents of Vandalia and Cassopolis stood up and stopped thirteen slave catchers from taking nine kidnapped slaves back to Kentucky.  They showed great courage and determination in stopping what they saw as a grave injustice.  Freedom seekers were allowed to testify in court and won.

When we encounter bigotry, intolerance and injustice we must find our own courage to do what is right --

On June 3, 2020 URSCC members wrote to me about a photo album available on Ebay.  It was African Americans from Calvin Township and Vandalia, MI dating back to the 1850's, including many tin types, a priceless album. (More)

Our 10th Annual Underground Railroad Days was fun, interesting, educational, and historical with something for everyone.  Vandalia expanded their offerings to include a Gospel Fest on Saturday night that was well attended with wonderful talent.  Over 200 were under and outside the tent for the Sunday morning community church service.  The soul food dinner sold out, and kids of all ages were entertained with family events. Kentucky Raid guided tours were full.   Hundreds toured the Bonine House, Carriage House and Bogue House, meeting Mary Charlotte Bonine, and loving her stories of growing up in the Bonine House.  Larry Collins demonstrated his fantastic woodburning portraits outside on the lawn.  The 102nd Colored Troops living history encampment were a highlight as always. Visitors enjoyed watching a blacksmith and spinner as well as talking to a Michigan frontiersman, while listening to various musical acts in the "Ramptown Cabin."  Presentations in the Youth Center were well attended, and Von Washington's "Opening Night" play drew an appreciative audience.

URSCC thanks Michigan Humanities Council for their support of Underground Railroad Days.  See you next year--second weekend in July! 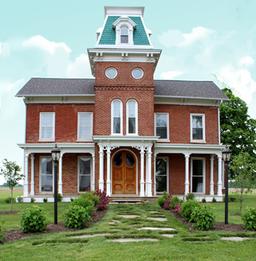 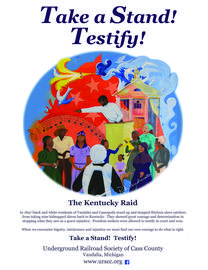 ​​​​​Visitors can tour the Bonine House, Bonine Carriage House and Bogue House June through September.  Docents will tell you the  history of each site.

or renew your membership

The Bonine House was host to hundreds of smiling visitors enjoying the lovely rooms decorated by members of URSCC.  Santa, Mrs. Claus and Jingles the elf were busy greeting kids of all ages.   Many come every year to see the progress on the Bonine House.  This year the highlights are the c. 1845 fireplace opened in the kitchen, and the lovely downstairs bathroom remodel.  The Bonine Family dining room furniture returned home in September, thanks to 6th generation descendant Jane Bonine Reilly of St. Charles, MO.

Click on the links below and the video will take you on a tour - each about 10 minutes long.

​The Stephen  Bogue House at M-60 and Crooked Creek Rd.

The Bonine House is closed for the present.   Stay safe.  We will see you when things open up again.

Click on the icon above to see a larger image. 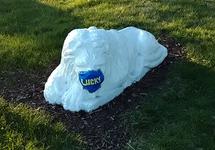 Click on each icon above to see a larger image. 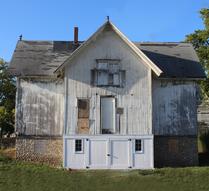 Stacey Bonine's 4th Grade class at Lake Center Elementary in Portage MI presented their UGRR Wax Museum--Cass County and Beyond-- on June 7th.  Fellow 4th graders who participated in the program but did not present, also attended.  All the students toured the Bonine House and Carriage House, then boarded a bus for the Kentucky Raid Tour that included a stop at the Stephen Bogue House.  Stacey's 4th graders have been presenting their UGRR Wax Museum since 2012.  They are always well prepared and delightful, and this year followed true to form.

Because of Covid-19 we were unable to open for Christmas 2020 . Here is a video tour anyway. 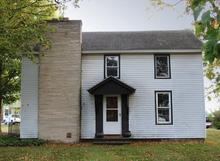 Take the URSCC self-guided driving tour of 20  UGRR sites within four miles of Vandalia, MI.   Click here or on the image. to view the tour and download a printable map.  Maps are also available at the UGRR Historical Marker in MIlo Barnes Park on M-60 in Vandalia.  The tour takes about an hour if you don't stop to explore. 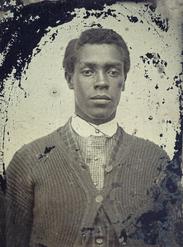 Click Here to use the following resources  to learn

about the Underground Railroad in Cass County.

"The Bonine House--A Legacy of Freedom"

A rainy day didn't dampen the spirits of Sam Adams Elementary School 5th graders as each class jubilantly jumped off the bus, and gathered on the front steps of the Bonine House, home of UGRR stationmasters James E. and Sarah Bogue Bonine.  They entered the house and sorted into six groups in various rooms-- The Kentucky Raid, Freedom Seekers, Pioneer Black Families, Civil War/102nd USCT and Connecting Lines.  Characters in each group were in costume and stood silently in their 'wax' pose.  Family and other visitors were welcomed to the house and given a program that gave an overview of each group, noted each character's name, and the name of the student playing that character.  They visited each room, and pressed a 'button' on each character, who came to life and gave a one minute speech about who they were and how they were a part of the Underground Railroad in Cass County, then went back to their 'wax' pose.  Each class presented for 1-1/2 hours.  The Bonine House rang with the chatter of UGRR characters, and shone with the smiles of those learning about them.

Sam Adams has presented the Cass County UGRR Wax Museum since 2013, but this is the first year it became part of the 5th grade curriculum, with all students participating,

Christmas at the Bonine House 2019​

For more photos and updates on the Bonine House restoration, click here

​James E Bonine Carriage House M-60 and Calvin Center Road,​ across M-60 from Bonine House.  (Photo is from the back of the building.)

Create an education and community events center in the Bonine House as a focal point for understanding the role local Quakers, African-Americans and other abolitionist groups played in the UGRR.  Restore the Carriage House as a period museum and station on the Underground Railroad.  Preserve the Stephen Bogue House as a station on the UGRR and home of Young's Prairie Quaker Anti-Slavery  Meeting.

Create a cultural tourism destination for Underground Railroad enthusiasts that will bring visitors and tourism dollars into the community.​​