The Underground Railroad Society of Cass County organized in 2009 with a mission " to provide a focal point for exploration into the origins and activities of the Underground Railroad; the unique role the people of Cass County and the surrounding area played throughout its existence, and how it impacted local, state and national history".  The organization had no money, no property, no membership to speak of.  Now, ten years later, URSCC owns and is restoring three Underground Railroad related buildings, and is acquiring a fourth.  Membership tops 400 and volunteers are abundant.  URSCC has raised and spent about $750,000 on purchasing and restoring the James E. Bonine House and the Bonine Carriage House, the Victorian home of UGRR stationmasters James E. and Sarah Bogue Bonine.

There is a 20 site self-guided driving tour of UGRR sites around Vandalia.  Three annual events-- Cass County UGRR Wax Museum, Underground Railroad Days, and Christmas at the Bonine House-- draw thousands  from all over the region.  Visitors from all over the world tour the Bonine House, Carriage House and the Stephen Bogue House, another UGRR station owned by URSCC, June through September.  Docents often get on tour buses and tell the story of the Kentucky Slave Raid of 1847, pointing out sites as they go.

URSCC treasurer, Cathy LaPointe, says there was a sense of destiny about this project.  "We were naïve and jumped in with both feet, somehow knowing it would be ok.  This is a story that wanted to be told.  The URSCC Board has been together since 2011, docents and volunteers are steadfast.  URSCC members support us every year with donations from $25 to $10,000, and we receive several grants.  As with so many organizations in Cass County, The McLoughlin Family Foundation has been a strong supporter.  They took a chance when we had little but a broken down Bonine House.  Their first donation allowed us to put on the porches, their current donation will allow us to complete the kitchen and pantry.  We plan to finish the Bonine House this year, and the Carriage House in 2020."

LaPointe continues "this community took a stand against slavery.  Quakers, free blacks and other abolitionists helped over 1500 freedom seekers on their journey to Canada between 1830 and 1860.  They did what was right under very dangerous circumstances. You can download a free ' Take A Stand--Testify!' poster on www.urscc.org.  Descendants of these families still live here, children portray their own ancestors in the Wax Museum.  URSCC is thrilled to have fulfilled its mission of ten years ago, and looks forward to many more years of celebrating the story and legacy of the Underground Railroad in Cass County, Michigan." 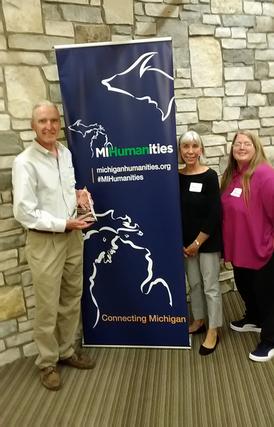 The Michigan Humanities Council recently presented the Underground Railroad Society of Cass County (MI) the award for Outstanding Humanities Organization 2021 at their awards ceremony in Mackinaw City, MI.  MHC presented the plaque and certificate to URSCC saying "Over the past ten years, URSCC has worked to fulfill its mission to research and educate about the Underground Railroad in Cass County, and to restore three UGRR related buildings as focal points for telling the compelling story.  Over four hundred members and an eight member Board have brought to life the critical story of a central juncture in the Underground Railroad."   URSCC president Mike Moroz, treasurer Cathy LaPointe and docent Cindy Yawkey traveled to Mackinaw City to accept the award.  Mike thanked MHC for the great honor, for their support for Underground Railroad Days since 2013, and for their recent grants from H.O.P.E. funds which have helped so many non for profits keep their doors open during the pandemic. 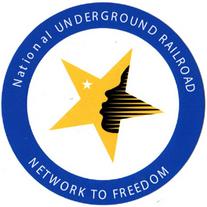 URSCC is pleased to announce that two of their programs have been accepted for listing on the National Parks Service Network To Freedom, a nationwide listing of nearly 700 Underground Railroad (UGRR) sites, with about forty sites in MI.  The announcement was made by Second Gentleman Doug Emhoff, and Secretary of the Interior Deb Haaland, in Washington D.C. on April 23, 2021. The URSCC listings are among sixteen nationwide.

One-Room School To Be Restored by Friends of Brownsville School

Underground Railroad Society of Cass County (URSCC) has recently purchased Brownsville School #1, 20559 Osborn St. in Cassopolis, MI.  This Calvin Township one-room schoolhouse was built in the early 1840's, and was integrated from the day it opened, until it closed in 1957, making Brownsville #1 among the longest integrated public school in Michigan, and perhaps the first one.  Friends of Brownsville School (FBS) has been formed to carry out this project, chaired by Jennifer Ray, retired Cass District Library Director.  This group will guide the restoration of the school  as a repository of photos and artifacts from all integrated, public, one-room schools in Cass County.  Brownsville will also be a demonstration site for Michigan prairie education, inviting tours and education events.

Brownsville School is a legacy of the Underground Railroad, operating primarily in Calvin, Penn and Porter Townships, from 1830s to 1850s.  Over 1500 fugitive slaves, now called freedom seekers, were said to be helped on their journey to Canada.  Many Free Black families arrived in the area in mid 1840s and early 1850s.  The bought property, primarily in Calvin Township, and established thriving farms, becoming respected members of the community.  Many descendants of these pioneer Black families still reside in the area.  The 1850 census for Calvin Township shows both Black and white children going to school.  The 1860 plat map of Calvin Township shows over a hundred Black owned properties, and four one-room schools, Brownsville School #1 is one of them.

URSCC purchased Brownsville School and two acres of property it sits on in November, 2022 from the Richard and Dennis Wooden family, whose relatives went to the school.  It was part of the Wooden family farm since 1960's, and required three years to clear title and zoning issues.  URSCC has taken steps to save the structure during this interval, tarping the roof and shoring up the foundation.

The extensive restoration will require funding from various sources.  Friends of Brownsville School will take on this challenge, as well as historical research and collecting memorabilia from other integrated, public, one-room schools in Cass County.  Jennifer Ray says "This humble schoolhouse has extraordinary stories to tell, valuable lessons to teach.  FBS looks forward to assisting URSCC to raising Brownsville's voice.  Come join us!"  If you would like to support this project, or join Friends of Brownsville School, contact Jennifer or go to www.urscc.org