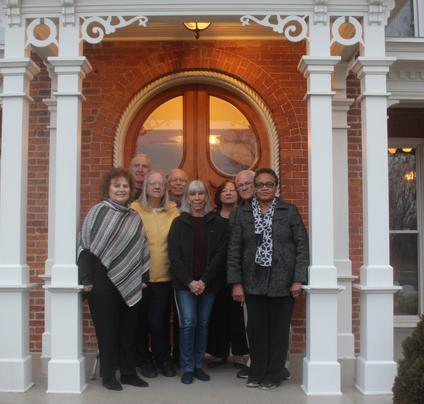 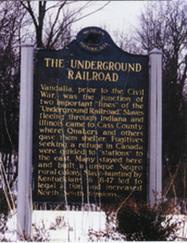 "Star of Freedom" was the name of an abolitionist newspaper published in Niles for a few months in 1845 by Jane Van Vliet. Due to lack of support by local businesses she had to stop printing, but her story and her name live on with URSCC. 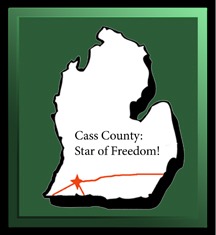 The North Star represents the way North for freedom seekers, often the only direction they had. "Follow the drinking gourd" was a common instruction.

The two lines linking to the star represent the two Quaker Lines of the Underground Railroad, one through Indiana the other through Illinois, that met in Cass County, where Quakers gave freedom seekers safe haven on their journey to Canada. The line heading east represents that journey to Schoolcraft, Battle Creek, Jackson, Ann Arbor, Detroit and finally Windsor (with stops in between).

The Underground Railroad Society of Cass County is a result of a group of area residents, historians and community activists meeting over several months in 2008-2009 to discuss the African American experience in Cass County.  The focus of the group evolved to looking at UGRR activity in this area; then to the acquisition of the Bonine House at M-60 and Penn Road, and the Carriage House across the street (after determining that indeed the house was built during this period and that James E. Bonine played a part in the UGRR). The group was unable to acquire the properties, but expanded its focus to the many UGRR sites and stories in Cass County, particularly the story of the Kentucky Raid of 1847, immortalized in the "Sanctuary and Deliverance" mural in downtown Cassopolis, unveiled in October 2010.

URSCC was incorporated  and received its 501c3 tax exempt status in June 2010.  Activities in its first year included partnering with the Village of Vandalia on "Underground Railroad Days" in July 2010, the documenting of a 10 site self guided driving tour, and the creation of this website, brochures and pamphlets.

URSCC held its first Annual Meeting in September 2010.  After two frustrating years, URSCC was able to purchase the Bonine House and the Carriage House, closing on December 29, 2010. The restoration of the Bonine House is ongoing, projected to be completed in 2018,  We are well on our way to accomplishing our goal of a community events and meeting center, and UGRR information and education focal point.  The Carriage House is also being restored, to be completed by 2018..

Our website has grown exponentially, and our driving tour has grown to 20 sites.  URSCC members present to groups throughout the region.  We are passionate about this story and appreciative of the support of our community and the greater UGRR world.