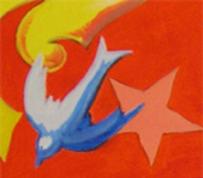 "Michigan and the Fugitive Slave Laws"

by David Chardavoyne
--from The Court Legacy, a publication of the Historical Society for the US District Court for the Eastern District of Michigan

Cass County and the Underground Railroad

The South Bend Fugitive Slave Trial took place two years after the Cass County Kentucky Raid of 1847.  Many of the same players were involved with both raids, rescuing their friends neighbors.  This raid, which also ended in a judgement for the freedom seekers, led fuel to the implementation of the 1850 enhanced Fugitive Slave Law.  The story of this trial is exerpted from "The Underground Railroad in Northern Indiana" Based on Personal Narratives and Famous Incidents.  Compiled by Helen Hibberd Windle, South Bend IN 1939.

This mural in downtown Cassopolis portrays the 1847 Kentucky Raid in four panels.  Under the auspices of The Minority Coalition of Cass County and funded by the Michigan Humanities Council, the design was conceived by local artist Ruth Andrews, painted by Ruth and many volunteers the summer of 2010, and unveiled in October of 2010. The first panel portrays freedom seekers crossing the Ohio River.  Next shows the Kentucky slave catchers entering a cabin to take 'their property' back to Kentucky.  The third portrays Quakers and other abolitionists confronting the slave catchers with their nine captives at O'dells Mill in Vandalia, resolving to settle in court.  The final panel shows African Americans testifying against the slave catchers in court--unheard of at the time-- and jubilant when the magistrate found for the freedom seekers on a technicality.  The nine kidnapped slaves and thirty others escaped on the Underground Railroad to Schoolcraft, Battle Creek and finally to Canada. More information about the mural and the Kentucky Raid can be found on the mural site.

"Out of Bondage" Perry Sanford's Interview

(Freedom seeker Perry Sanford's account of escape from Kentucky, arriving in Cass County, and being part of the Kentucky Raid)

"Out of Bondage" Illustrated by Cindy Yawkey

A Powerpoint version of the book.

"A Stop on the Long Road to Freedom"

In the years leading up to the raid, the number of freedom seekers escaping Kentucky increased. Local slaverunners Wright Modlin of Williamsville and William Holman Jones of Calvin Township frequented Bourbon County, Kentucky, bringing enslaved men and women back with them to Cass County. Frustrated with the constant loss of their property, and in an attempt to recover their investments, Kentucky planters banded together in hopes of retrieving their slaves rumored to be living among the Quakers in Cass County.

In August of 1847 a group of thirteen Kentucky slave catchers arrived in Cass County. They broke into smaller parties and proceeded to various Quaker farms, including the Bogue, East, Osborn and Shugart properties, capturing nine fugitives. Word of the kidnapping spread quickly, and numerous people gathered to stop the Kentuckians, including Quakers, free blacks and other abolitionist townspeople (some note the crowd at over 300!).

A confrontation ensued  at O'Dells Mill in Vandalia and the Kentuckians brandished weapons. The Quakers present were credited with calming the situation before it escalated into further violence. Because they were outnumbered, and because they believed the law was clearly on their side in light of the Fugitive Slave Act of 1793, the Kentuckians agreed to go to Cassopolis and stand trial.  The captives were detained in a local tavern.  The Kentuckians had to post bond to stay out of jail.

There was a three day delay in the trial proceedings while the Kentuckians gathered the necessary documents to prove ownership of the captives.  In the absence of the Cass County Circuit Court Commissioner, a Berrien County Commissioner Ebenezer Mcllvain, who was also an abolitionist and UGRR conductor in Niles, was brought in.  When the trial commenced, Quakers, free blacks and fugitives filed charges against the Kentuckians.  The Commissioner found for the freedom seekers, saying the Kentuckians didn't have the correct paperwork. The freed captives, along with thirty-four other fugitives, left for Canada on the UGRR.

The outcome of the Kenutcky Raid and trial incensed Southern slave holders.  It added fuel to Southern demands for a more stringent Fugitive Slave Law, which was passed by Congress in 1850, making it much more dangerous to be or harbor a freedom seeker.

The slave catchers returned to Kentucky empty handed, but in late 1849 sued for the 'value of their property' ten men who were involved in the Raid--Quakers Steven Bogue, Josiah, Jefferson and Ellison Osborn, Ishmael Lee, Joel East, and Zachariah Shugart; along with David T. Nicholson, William Jones and Commissioner Ebenezer Mcllvain--in US District Court in Detroit. The attorney for the defense was Jacob Merritt Howard, an abolitionist and former member of Congress (1841-43). In1854 he helped found the Republican (anti-slavery) Party; and as a US Senator during the Civil War, he would draft the thirteenth Amendment abolishing slavery.  The civil trial took over two years when a settlement was brokered and funded by David T. Nicholson, an outcome not favored by the Quakers, especially Stephen Bogue.  Lawyers for the defendants argued that because the case was filed under the 1793 Fugitive Slave Law, the trial should not proceed because that law was no longer in existance, replaced by the 1850 Law.  Nicholson however settled for paying all court costs, over $2000.  Court records state that in 1855 all remaining cases involved in the Kentucky Raid were dismissed.  Again, the Kentuckians received nothing for their trouble.

Historians note that the Kentucky planters involved in the Cass County raid were friends of Senator Henry Clay, who championed the Missouri Compromise as well as the 1850 Fugitive Slave Law in the US Congress.  The failure of these actions to stop North/South tensions over slavery ultimately led to the Civil War.

Click on the links below for more detailed (and colorful!) accounts of the Kentucky Raid found in two Cass County Histories, the Michigan Milestone Marker ceremonies, and an eye witness account from a freedom seeker who was one of the targets in the Raid; along with an artistic interpretation of the incident.

Also read an account of another "Kentucky Raid" trial that took place in South Bend Indiana, but involved freedom seekers and the residents of Cass County.