7. Brownsville School #1: 20447 Osborn St. Michigan ordered neighborhood schools built in 1837. By 1850 one room schools were established in five districts in Cass County. Many in Calvin, Porter and Penn Townships were integrated. Brownsville #1 was integrated from the day it opened in the mid 1840's until it closed in 1957. Owned and being restored by URSCC. 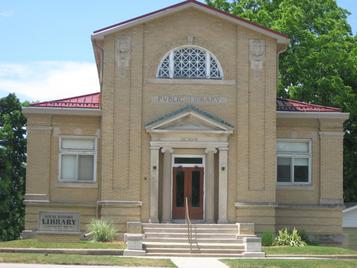 6. Bethel AME Church and Cemetery: Mt. Zion Rd. just west of Calvin Center Rd. Organized in 1856 and built in 1870, there was a library of 103 volumes attached to the original church. Many early black pioneers are buried in the cemetery, as well as several 102nd USCT Civil War soldiers.

11. Charles Osborn Home 1842-1847: M-60 and Calvin Center Rd. (2nd house) Charles Osborn, a Quaker Minister, was called "the father of all us Abolitionists" by William Lloyd Garrison. He started publication of "The Philanthropist" newspaper in 1816 in Mount Pleasant, OH. Osborn lived in this house with his second wife, Hannah Swain. Along with Stephen Bogue, he started Young's Prairie Anti-Slavery Meeting in 1843. His son Josiah and grandsons Jefferson and Ellison were involved in the Kentucky Raid. The house was moved to this location from behind the Carriage House in 1939. (private property) 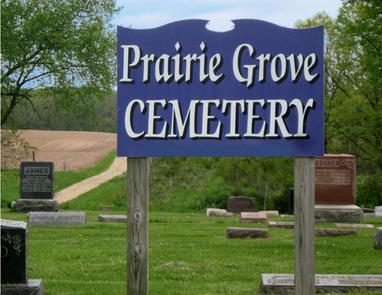 5. Mt. Zion Church and Cemetery: Mt. Zion Rd. and Kessington St. Organized in 1849, built in 1854, the first trustees included Lawson Howell and William Allen. The church was abandoned in the 1920's and burned to the ground in 2012. Many members of the 102nd Colored Troops in the Civil War are buried here. 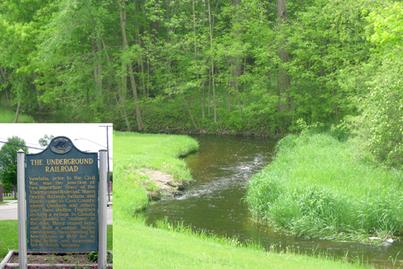 (Site of) Vandalia Quaker Meeting House: Built by James E. and Lot Bonine on land donated by Stephen Bogue, dedicated in 1879. Built of bricks kilned on Lot Bonine's farm, and designed by the same architect as James E.'s 2nd Empire remodel. Sold to Masons F&AM Lodge 290 in 1917, and abandoned in 1971. Sadly, the building collapsed in 2013. Bricks are being used in the Bonine House restoration. 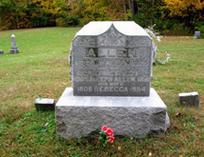 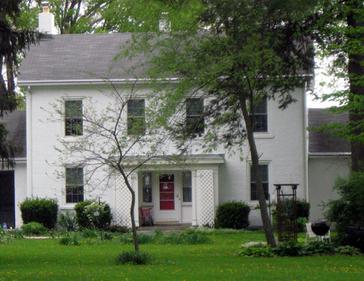 (Site of) Bonine Elk Park: M-60 just east of the Bonine House. In 1862 James E. Bonine established a 60 acre park stocked with elk, deer and buffalo. It became Bonine Elk Park, one of MI first state parks, in 1950. The park was closed in 1979 and the historic UGRR marker was moved to Vandalia. 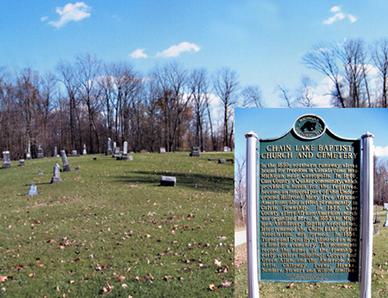 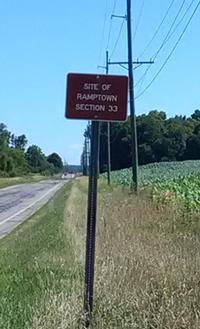 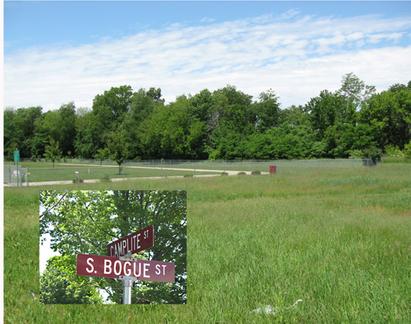 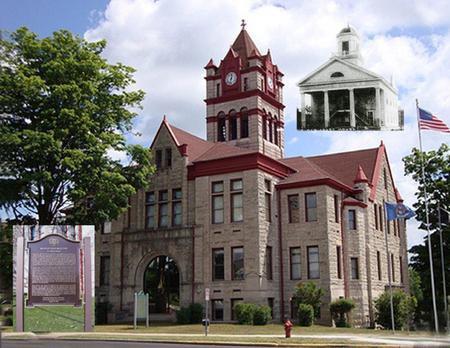 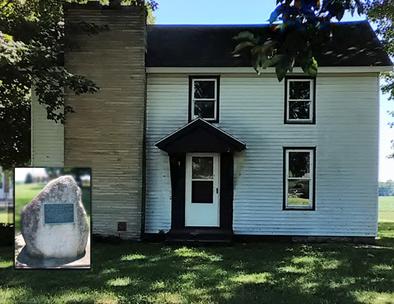 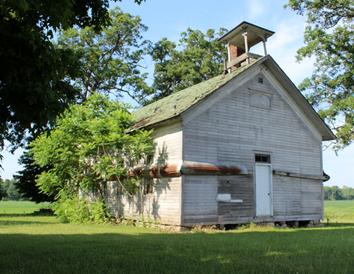 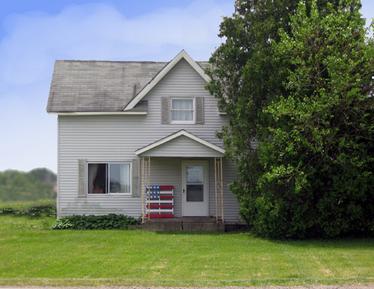 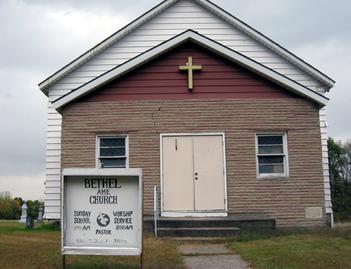 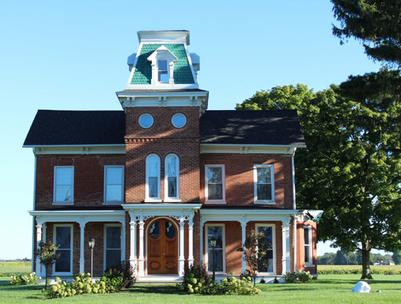 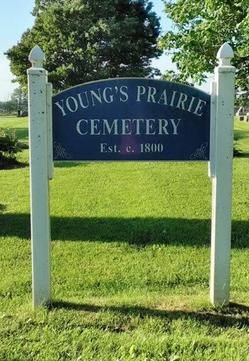 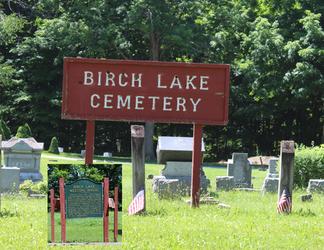 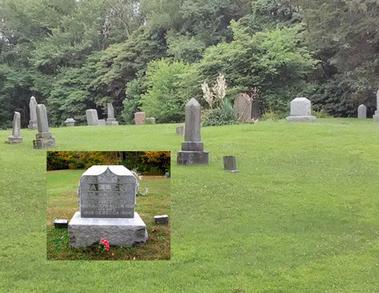 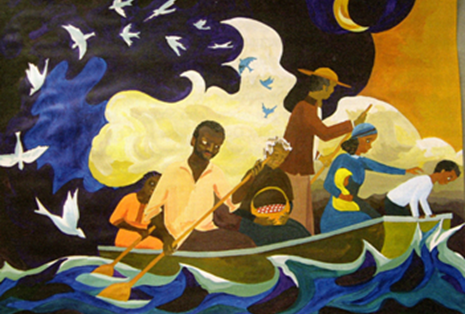 20. Sanctuary and Deliverance Mural: Downtown Cassopolis. Created by local artist Ruth Andrews and community volunteers, the mural depicts events in the 1847 Kentucky Slave Raid. It was created to "encourage dialogue and reflection on that event and relevant issues." Additional information can be found on site.

18. Cass County Courthouse/MI Milestone Marker: Broadway and State St. downtown Cassopolis. The current courthouse was built in 1899 replacing the site of the Kentucky Raid trial of 1847. The Michigan Milestone Marker, honoring the story, was placed by the State Bar of MI in 2005.

17. Stephen Bogue Home: M-60 and Crooked Creek Rd. Quakers Stephen Bogue and his wife Hannah East Bogue were well known stationmasters on the UGRR. He was a founding member of Young's Prairie Anti-Slavery Meeting. His daughter, Sarah Ann Bogue, married James E. Bonine in 1844. Bogue was prominent in the Kentucky Raid. He donated land and platted the Village of Vandalia. Many descendents still live in the area. The stone was placed by a women's group in 1931. Owned by URSCC.

16. William Jones Home: M-60 and Gards Prairie Rd. Quaker William Jones, known as "Uncle Billy" was a strong abolitionist and his home was a station on the UGRR. He hired freedom seekers and free blacks to work on his large farm, and during the 1847 Kentucky Raid, unarmed, he kept a party of slave catchers from kidnapping freedom seeker Perry Sanford at the Bogue House. (private property)

14. Penn Friends Church: Penn Rd. and Quaker St. An outgrowth of Birch Lake Meeting, the original Penn Friends Meeting House (pictured) was built in 1880 on land donated by Nathan and Lydia Jones (sister of James E. Bonine). That building was moved to the Ed Lowe Foundation in 1987. The present church was erected in the 1970's and the new sanctuary in 2002. 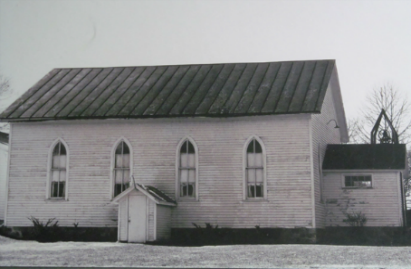 13. Isaac Bonine Homestead "Cedarlee": Penn Rd. south of the railroad tracks. Established about 1842 and now owned by descendants of Isaac and Sarah Talbot Bonine, stationmasters on the UGRR and parents of James E. Bonine. Cedarlee refers to the white cedars along the drive on the "lee" side of the property that were being planted when President Lincoln was assassinated. They stopped planting for two days to pay tribute. (private property) 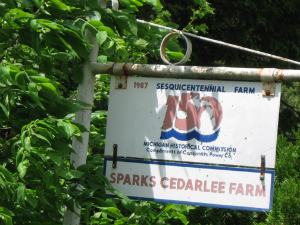 12. Prairie Grove Cemetery: Penn Rd north of Fox St. Isaac Bonine (father of James E.) constructed Prairie Grove Meeting House in 1841in the northeast corner of this cemetery, likely as a result of the split in the Birch Lake Quakers over UGRR activity. After reuniting in 1856, Prairie Grove was used alternately with Birch Lake until the Vandalia Meeting House was constructed in the 1870's and Penn Friends Meeting House in 1880. Isaac and Sarah Talbot Bonine, Stephen and Hannah East Bogue, Hannah Swain and other abolitionists are buried here. (James E. and Sarah Bogue Bonine are buried in Silverbrook Cemetery in Niles.)

9. & 10. Bonine House and Carriage House: M-60 and Penn/Calvin Center Rds. James E. Bonine built a Greek Revival farmhouse around 1845. He remodeled it after the Civil War, adding the tower, porches and north addition. He built the Gothic Revival Carriage House around 1850. Freedom seekers were sheltered there, making James E. and Sarah Bogue Bonine stationmasters on the UGRR. Both properties are owned by URSCC and are in process of restoration.

8. Site of Ramptown: West of Calvin Center Rd. (about 1/2 mile south of M-60). James E. Bonine purchased Section 33 in 1853. He invited freedom seekers and free blacks to settle there. In exchange for clearing it, they built cabins, gardened, sent their children to school and earned their own money. The settlement of about 30 cabins came to be called Ramptown after ramps (wild leeks) that grew in the area. Many residents eventually purchased their own farms and prospered. 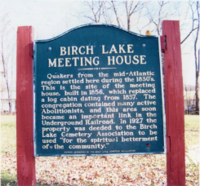 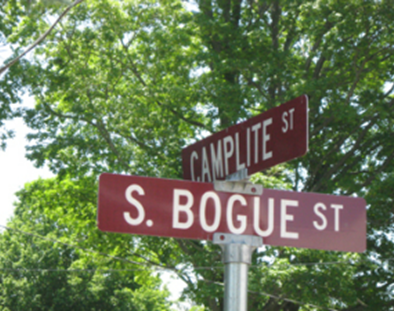 2. Site of Henry and Martha Shepard Home: Camplite and S. Bogue St. (east of Vandalia Cemetery). Henry escaped slavery and became a UGRR conductor here. At age 46 he fought in the Civil War. Martha Barton was born in slavery and brought to MI at age 6. Henry and Martha married, had 15 children, and were stationmasters on the UGRR. Henry testified against the KY slave catchers, charging them with breaking and entering his home. The family moved to Covert, MI after the Civil War.

4.   Chain Lake Missionary Baptist Church: Chain Lake St. east of Carver Rd.  Founded in 1838, Chain Lake is one of the oldest African American churches in Michigan, and the oldest in Cass County.  The log church was built in 1850 and an Anti-Slavery Society was formed in 1853.  Many church members served in the Civil War and their graves dot the cemetery.  Descendants of the founders still reside in the community.

1. UGRR State Marker/O'Dells Mill: M-60 and Milo Barnes Park, Vandalia. The marker outlines local UGRR history from 1830's to the Civil War. O'Dells Mill was on Christiana Creek. It was here during the Kentucky Raid of 1847 that townspeople gathered to oppose slave catchers and decided to settle the matter in court.