Cass County and the Underground Railroad 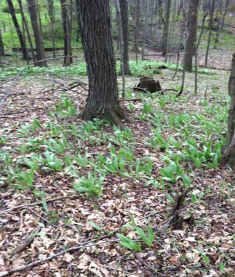 In a large sauce pan, fry bacon.  Set bacon aside.  Save 3 tablespoons bacon drippings and add ramps and potatoes.  Cook until ramps are tender.  Add flour and stir until flour is absorbed. Stir in chicken broth and cook until potatoes are tender. Add cream and crumbled bacon.  Add salt and pepper to taste. 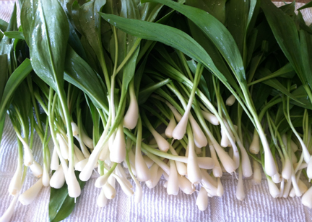 "Ramptown" was named after the wild spring plant, ramps (also called wild leeks), that grew in the area where cabins were built.  It was one of the first plants to appear in the Spring, and was a welcome addition to the dull foods of winter.

URSCC concludes that while there were scattered cabins on several Quaker farms throughout Penn, Calvin and Porter        Townships, oral history, written and and personal testimony put the settlement called "Ramptown" at a specific site on        James E. Bonine land.

Cass County residents remember a particular settlement called Ramptown (probably named after a wild leek that flourished in the area). They say it was a community situated on land belonging to James E. Bonine south of M-60 west of Calvin Center Road. Jame E. Bonine purchased Section 33 in 1853 and invited freedom seekers and free blacks to come and clear the land in exchange for being able to live there.  They built their own cabins, cultivated gardens and could earn their own money, send their children to school and go to church.  Ramptown became a community of 20 to 30 cabins that lasted well into the 20th century.

Virginia Springsteen was 90 years old in 2002. She grew up on a farm located where Ramptown had been.  When she was driving with her neighbor down Calvin Center Road and got to the corner where Bonine Street dead ends into Calvin she said "Stop the car, right here on this hill is Ramptown."

Virginia Springsteen's mother asked her African American farmhand Tobe Harper about the debris that littered one small area of the farmyard.  Harper's reply was "That's where Ramptown was.  My mother-in-law (Chloe Guess) was born in Ramptown."

In his 1963 Ph.D. dissertation for University of Michigan, Clarence Knuth interviewed Fred Wright, great-nephew of James E. Bonine. Based on what Wright told him, Knuth wrote, "Ramptown apparently developed into a tree-shaded cabin settlement of moderate size with a population of approximately 100 individuals and a school for the Negro children."

When the Bonine farm was offered for sale in 1953, an article in a local paper says "Slaves who managed to escape in the South made their way northward by 'underground railway,' sometimes a dangerous and even foolhardy business. Many succeeded in getting into Michigan. Once over the border they felt themselves almost safe and many settled here. Much of Cass County was cleared by those slaves, who were given a cabin and the right to make their way by growing crops".

Quaker farms were dotted with cabins that freedom seekers lived in while they worked on the farms.   Many continued on to Canada, but some stayed and settled in the area.

It is known that fugitives were living in cabins on Quaker farms in the 1847 Kentucky Raid. Raiders captured them on the Osborn, East, Bogue and Shugart properties according to Mathews  and Rogers Histories of Cass County (see KY Raid)

The existence of scattered cabins on Quaker farms was verified by a team of archaeologists, students and historians from Western Michigan University in 2002. 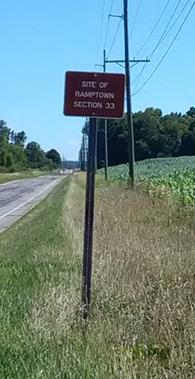 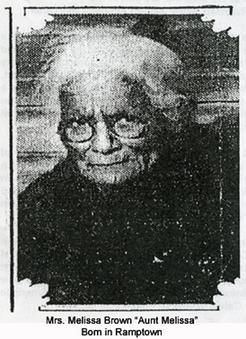 "One of the queer settlements of fugitive slaves was called 'Ramptown' and was a cluster of some 100 Negro cabins on the land which is now the big Bonine farm. There 'Aunt Melissa Brown' now aged 80 was born. The cabins were torn down some half century ago and the place where they stood is now a plowed field, part of the rich land under cultivation on the farm."

Nathan Jones, 109 years old, died in the Cass County infirmary in 1923. An article in a local paper of that year quotes him as saying. "From James Bonine's corners south into Calvin was an unbroken wilderness, dotted here and there with a cabin in a small clearing. The section was called "Ramptown" and I did my share helping clear much of it."

Many current Cass County residents remember hearing about the community. One said "I grew up knowing about Ramptown. Everyone knew where it was." 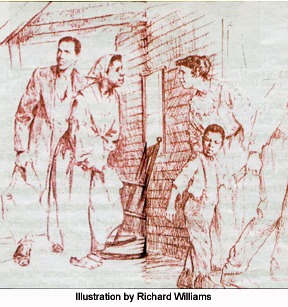 The story as well as the location of "Ramptown" a settlement of fugitives and freedmen, has been handed down by Cass County residents through the decades.

When freedom seekers reached Cass County in the 1840's many felt safe enough to settle here, because Michigan was a free State and there were many Quakers, free blacks and other abolitionists in the area who were friendly and supportive of their quest for freedom. They formed mutually beneficial relationships.