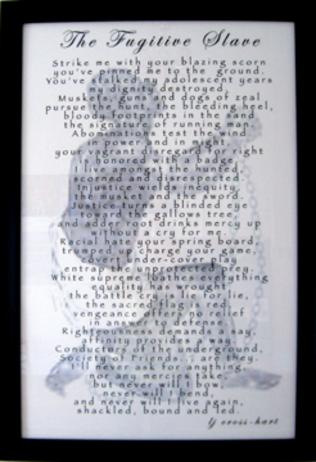 A framed print of Lois's poem "The Fugitive Slave" hangs prominently in the Bonine House.

Lois was appointed Cass County MI Poet Laureate in 2012.  She wrote the following poem in honor of Underground Railroad Days.

Click below to read the rest of Lois's Biography

Strike me with your blazing scorn

you've pinned me to the ground


Muskets, guns and dogs of zeal

pursue the hunt, the bleeding heel,

bloody footprints in the sand

the signature of running man.

your vagrant disregard for right

is honored with a badge.

I live amongst the hunted,

the musket and the sword.

toward the gallows tree,

and adder root drinks mercy up

without  a cry for me.

trumped up charge your game,

the battle cry is lie for lie,

the sacred flag is red,

in answer to defense.

Conductors of the underground,

I'll never ask for anything,

nor any mercies take,

but never will I bow,

and never will I bend,

and never will l live again,

In the land of the free and the home of the brave,
(may the merciful Lord keep it that way)
Not for the pride of the nation, not for the grandeur of same,
But just for the sake of the human race, the dignity of man.
There was a day when the faithful prayed,
When the north wind whispered STORM!
When the sky turned grey with clouds of fear
And the south wind whispered WAR!

The Free prepared a passageway, secretive, deep and down,
The Brave that rode that dangerous track
Rode the rails of the Underground.
The spacious skies provided light and the amber colored grain;
Waved them on, northwesterly, to the peaceful land of Penn.

Resolute pioneers of faith on a covered wagon trail,
Pursued by the volatile winds of change like a battered ship a-sail.
With hearts as tender as the dew with pity for the awful fate
Afforded to the black skinned race.

Cotton fields, rows and rows, babies strapped, on their mother’s weary back.
Men of strength and muscled brawn, sold for pennies on the pound.
Black men from another world with ancient arts and ancient skills,
With brick and mortar, tar and timber built the mansions of Savannah,
Built the city of Atlanta.

Human slavery, human misery, auction blocks, repugnant sights;
(chattel has no human rights)
This the Quakers could not take, a contradiction to their faith.
Men of mettlesome temperament, vivacity and vigor,
Who lived their time and fought the fight for equal sameness, equal rights.
Not for a badge of decoration, not for praise nor celebration-
Their accolades are in the air, their signature is everywhere.
The root of wrong cannot survive when honor wields an axe,
When men of high integrity lift up their arms to strike.

The hero’s of old, on history’s page, faded yellow, worn with age.
Parchment torn like the heart of those whose heart the God of mercy knows.
The generous heart, noble in deed can’t forfeit the moral ignoring the need.
Abolition hardly was a promise they could make,
But to the weary on the run they offered help in flight.
In the course of sovereign time, right would bridge the great divide.

Posterity does name them; legends fit for verse.
Henry Shepard, (American of African decent)
And Zachariah Shugart, (who said) Stop at the “Station”
The “Depot” and rest, and listed the names of the refugees kept.
Conductors they were and knew “Safe Houses” best.

“Station to Station” traveled by night, the northern star for a guiding light.
The wheels kept running on the Northwest track;
With precious “Cargo” hidden in back.
Freedom seekers and their keepers, Stationmasters,, Black and White,
Bond and Free, Native Americans, the Potawatomi.
James Osborn, Ishmael Lee, Stephen and Hannah Bogue,
The Abolitionist, William Jones, a “Safe House, Yes, on Gards Prairie road.
Further on down the long rail line, the Carriage house of James Bonine.

Five sorrowing souls from bondage flee to the Calvin farm of Joel East.
How can a man of moral right refuse to defend, suffrage and fight?
Captured, dishonored, shackled debased,
By the culpable slave catchers Kentucky Raid.
Another name on the scroll of fame when the roll is called up yonder,
Another harbor in the storm, a refuge for the old, the young,
A generation yet to come.
A Railroad without tickets, without a scheduled plan,
In the Northwest Territory, in the County of Cass it ran.
“Can you provide entertainment for myself and for my friend?”
The password each Conductor knew were the words of a running man.

“Station to Station” traveled by night, through thickets of brier,
Deep forested land, ravines as deep as the depth of man.
Rivers of life where man can rest and marsh-land rich with nature’s best,
Where the red wing blackbird swings and sings on a bent down reed-
A psalm, a prayer for a better world.
A world where the great “Apostle of Peace” William Penn dared to believe.
The pursuit of happy was everyone’s right and liberty, the heart of life.

Chain Lake Missionary Baptist Church, Old and Black and Free.
It stands even now on original ground, a new façade but strong and sound
Historically built in the year of our Lord, eighteen hundred and thirty eight.
Built with indigenous tree hewn log and rock from the heart of virgin soil
And hope that leaps from the inner soul.
Noble in thought and great in deed, a people of faith in what could be,
The Anti Slavery Society.
With purposed aim and a clarion call, “Emancipation, Freedom for all.”
And there amongst the prayerful throng, the Friends of those-
Whose backs have bared the rod, the lash, the cat a’ nine tails.
Together as only one can be when a common cause is unity.

Under the August sky of heaven, the year was eighteen forty seven.
They came, they saw, a plan they laid,
To implement the Kentucky Raid.
If ever a man was ready to battle defending the image of God,
It was the stalwart men of then, the Brave of Calvin, the Brave of Penn.
One swift running horse and clubs that kill,
One danger alarm sounded loud and shrill
And a angry crowd at the O’Dell Mill.

There are you know, mysteries though, that cannot be explained.
I believe, indeed I do, phenomenons can be true.
It happens in the Summer’s June, toward the latter end,
When evening shadows gather and day birds all but scatter.
And the little nightshade flower shuts her eyes.
One can feel an expectation, a joy, anticipation,
Running through the corridors of time.

The folks are all a sittin’ round the little Cabin door,
Where the present intermingles with old memories that last,
And the peace of inner joy is not linked to circumstance.
And the preciousness of now is our not-forgetfulness,
Cause the Cabin tales are tellin’ bout the days long past.
There’s a fiddle and a banjo and a voice so heavenly
The Angels stop to listen when they hear Melindy sing.
Melodies of yester-year, those sad plantation songs;
Melancholy symphonies of days long gone.
Heish up Rover! Stop dat’ barkin’ I jest’ want ta’ heah’ da’ soun’
An’ see dose proud men free et’ las’, cleah da’ virgin groun’
An’ smell da’ sweetest onion scent in ole’ Ramptown.