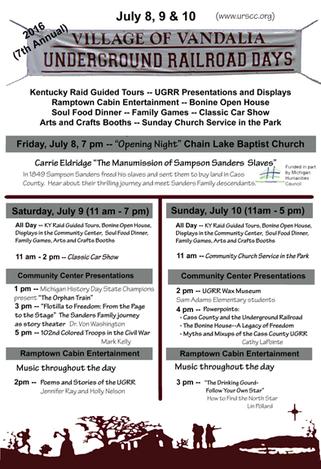 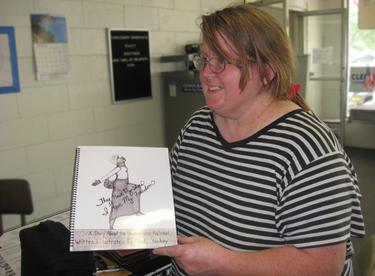 Carrie Eldridge talks about her book 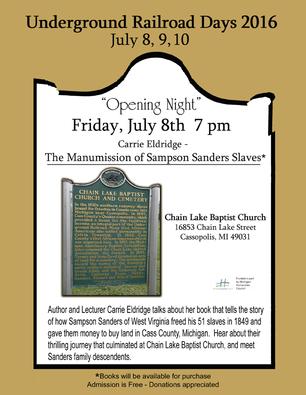 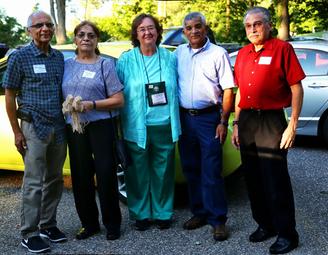 Dr. Von Washington talks about creating a play from Carrie Eldridge's book that focuses the Sanders family and their journey to Cass County in 1850.

Cathy LaPointe presented a talk on "The Myths and Mistakes of the UGRR in Cass County".

Click here for a PDF summary of her talk.

Mark Kelly talks about the 102nd US Colored Troops (USCT) in the Civil War. 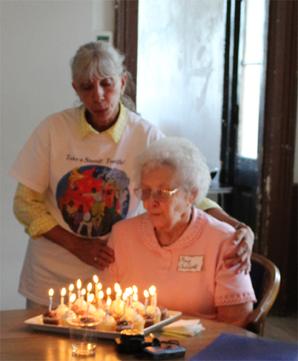 We introduced "They Have My Shoes  I Have My Freedom"  written and illustrated by Cindy Yawkey.

This was a presentation by author Carrie Eldridge at Chain Lake Baptist Church on Friday, July 8 to celebrate “Opening Night” of Underground Railroad Days 2016.  There were 25 Sanders family descendants in the front pews, representing the 7th, 8th, 9th, and 10th generations of Sanders in Cass County and the surrounding region.  They are descendants of Solomon Sanders, shown on the board.  Many Sanders are buried in Chain Lake Baptist Church cemetery.

Mark Kelly as a member of the 102nd Colored Troops in the Civil War.

Five local churches gathered to worship in the park on Sunday morning, and a community choir sang the good news.

Paul Lawson is a 7th generation descendent.  He and his wife, Sara, retraced the family’s journey from Chain Lake Church back to Cabel Co Virginia in 2015.  They met and got to know Carrie Eldridge, and Paul was honored by Marshall University.  Sara created these boards to explain the family tree, and commemorate their journey

Synopsis of the Sanders Family Journey--

Sampson Sanders was a wealthy plantation owner in Cabel County,  Virginia, where Kentucky and Ohio meet.  He was raised with slave children on the frontier and grew to love and respect them.   He inherited slaves from his mother, but wanted to ‘manumit’ them, which means set them free.  The only way to do this was in his will, which he did when he died in 1849.

He provided money and legal assistance for 51 freed slaves to come to Cass County and purchase land.  They were five family groups, who arrived here in 1850.  They built giant rafts that held what they needed to start a new life in Cass County.  They rafted to Cincinnati, then took a train to Elkhart, IN.  From there wagons to Chain Lake Baptist church, where they camped for the winter.  They purchased land on arrival and started clearing in the spring.  All were on the 1850 census,  keeping the Sanders name, farming in Calvin and Porter townships.

This is an amazing story of members of our community and their roots.  The Sanders family today is large and close knit, reflecting the values of their ancestors. Carrie Eldridge’s book is available on Amazon.com. 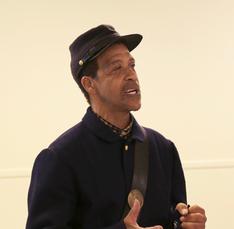 The 7th Annual Underground Railroad Days in Vandalia Michigan  had something for everyone.  The Village of Vandalia sponsored games for kids, a car show, vendor booths, a delicious soul food dinner and a rousing community church service in the park on Sunday morning.

The Underground Railroad Society of Cass County (URSCC) offered guided tours of the 1847 Kentucky Raid sites, period activities and music, presentations on many aspects of the UGRR including the story of the Sanders family and their journey from Virginia to Cass County, and the 102nd Colored Troops in the Civil War.  Hundreds visited the historic home of UGRR stationmaster James E. Bonine, and Mary Charlotte Bonine, the last Bonine to live in the home,  talked about her life there from 1934-1953, when Elk Park Farm was in its heyday.

Spokesperson Mike Moroz, president of URSCC, was pleased with the festival.  “This year the Village of Vandalia offered more activities for families that drew a wider variety of people.  URSCC included period activities like a black smith, and soap and butter makers.  That aspect will be expanded next year.  UGRR Days continues to grow in scope and appeal, we’re very proud of that and thank everyone for their support. “  Underground Railroad Days is celebrated annually the second weekend in July.