Wax Museum at the Bonine House 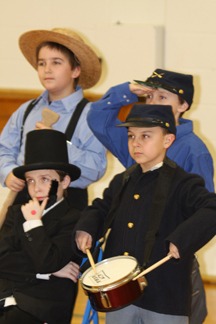 All the characters were part of the story of the Underground Railroad in Cass County.   Many of the students are forth and fifth generation descendants of the characters they portrayed.

Fifteen of the students debuted their characters at the Black History Breakfast in mid- February.sponsored by the Minority Coalition of Cass County.  And about twenty-five performed at Community Church in Cassopolis, as well as at Ross Beatty High School.

Fifth Grade teacher Felomina Patton coordinated the effort along with URSCC Education chair Ruth Andrews. Members of the community as well as URSCC members volunteered to help the students choose their characters, write their scripts and create an appropriate costume.  Mary Anne Bonine of Galesburg did meticulous research on the characters involved in the story, which she gathered into folders, acting as the resource for student scripts.  She donated skirts, bonnets, hats, aprons, coats, vests, suspenders, and other items, allowing each student to create an appropriate costume.  Wayne Falda acted as documentarian and photographer.  His photos can be seen below, inscribed with the name of the character portrayed by each student.

The students will perform at the Bonine House on April 27th from 1-3pm, as well as during UGRR Days in July.

CLICK HERE TO VIEW THE WAX MUSEUM AT THE BONINE HOUSE VIDEO!

Students from the 4th, 5th, and 6th grades at Sam Adams Elementary School in Cassopolis presented a Cass County Underground Railroad Wax Museum in the school gym on Thursday February 21.  The students chose their character, and researched his or her life.  They wrote a one minute script about the highlights and recited it after a student in the audience pushed a button to bring the character to life.

at the Bonine House