Maria was a woman of warm and generous spirit, great beauty, and a truly loving heart.  Her wonderful talent for decorating  was showcased in the rooms she did for Christmas at the Bonine House in 2013, 2014 and 2016.  Maria loved Christmas and the Bonine House.  In her memory her family and friends re-created the dining room that Maria decorated for CBH 2017.

URSCC is deeply grateful to Maria and her family for directing memorials to URSCC.  We will miss her more than words can say.

From 2012 to 2019 she visited her home during Underground Railroad Days the second weekend in July where she delighted in greeting visitors and telling them about growing up on Elk Park Farm.  She was accompanied by family and friends on these trips.  Over the years she donated Bonine family photos, furniture and artifacts to the Bonine House.

Mary Charlotte was a concert pianist, a dog and cat lover and a sports enthusiast.  A farmer at heart she always referred to the Bonine House as 'home.' 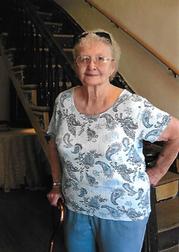 Mary Charlotte Bonine Roberts 86, died on January 15 in Valdosta, GA from complications of Covid-19.  She was the daughter of State Senator G. Elwood Bonine and Ruth Morse and grew up in the Bonine House, the Victorian home at Penn Rd and M-60, built by her ancestors James E. and Sarah Bogue Bonine, stationmasters on the Underground Railroad.  Mary Charlotte was part of the first graduating class from Cassopolis High School and returned for her 50th reunion in 2002.  It was then she saw her beloved home almost in ruins, and hoped an organization could save it.  She was thrilled when the Underground Railroad Society of Cass County (URSCC) purchased the Bonine House and the Bonine Carriage House across the street in December, 2010.

We miss you Mary Charlotte. 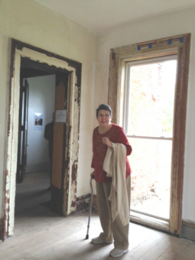 Mary Anne was related to Levi Coffin, called the president of the Underground Railroad.  She gifted the Bonine House with this beautiful cupboard from that side of her family in 2013. 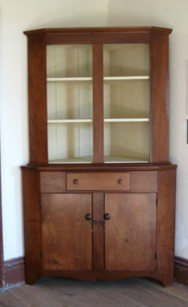 As part of Underground Railroad Days 2013, Mary Anne collected ramps (wild leeks) from her woods, and made delicious "Ramp Soup" which she served to guests. 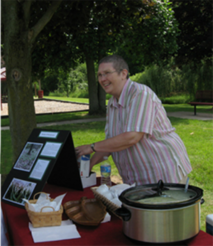 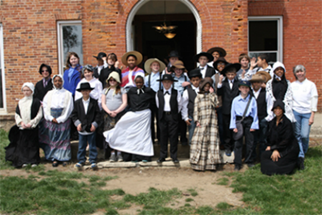 Mary Anne helped Sam Adams Elementary students with their costumes preparing for their version of the UGRR Wax Museum.  She researched local UGRR characters and purchased the costumes for this annual event. 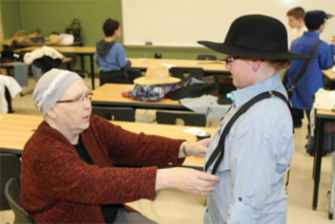 Mary Ann helped to bring Angling Elementary of Portage MI to the Bonine House in 2012 to stage their UGRR Wax Museum, an annual event 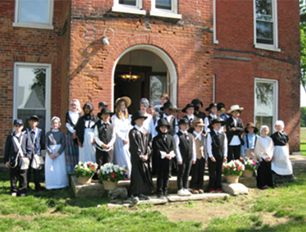 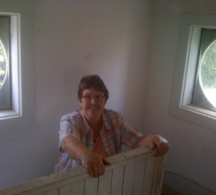 Mary Anne loved the Bonine House and delighted in visiting to see the progress of restoration.  Here she is shown at the first flight of the tower stairs.

In the summer of 2012 Mary Anne donated $25,000 in memory of her late husband, Alan, to re-roof the entire Bonine House.

During the last few months I have had the amazing experience of learning about the individuals who contributed to this special community during the years when slavery in the south had consumed nearly four million people.  Reading and studying primary source documents has allowed me to peer into the lives of courageous individuals in a way that is quite profound.  In every case I have become acquainted with people from the past who chose to do the right thing even when this was very difficult.

When Booker T. Washington visited Cass County in 1902, he recognized the unique qualities of the community.  The success of the community was the result of groups of people working together.  The Quaker Abolitionists and Chain Lake Abolitionists defied the laws of the country to provide a community where hope of freedom existed.  Their motivations may have been different, but in every case they did what was right at great risk to their own safety and financial well being.  Canada was the final destination for many, but hundreds did not find the need to go on.  The free black residents who were prospering welcomed these new families into their neighborhoods and churches.  Schools were built to accommodate all children and provide an education that was never available in the north or south.  Several rural schools were taught by African American teachers and elected officials in Calvin, Porter and Penn townships were chosen based on their strengths as leaders and not their race.

Having the opportunity to learn about this special community continues to be a source of great pleasure and inspiration.  My hope is that my grandchildren and beyond will learn the story of Cass County and will also be inspired  by the people who lived and participated in this great Underground Railroad movement.  As they make choices in their own lives, perhaps they will remember that once there was a community that chose to do what was right.  May the story continue to be told.

This stone has been in the front yard as long as anyone can remember.  Mary Anne identified it as a "Puddingstone" a type of stone formed in Canada and northern Michigan and transported south by glaciers.  She knew this because her husband Alan collected them. 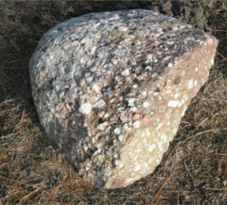 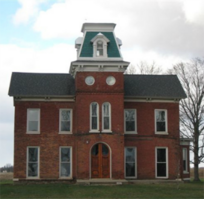 The Flowering cherry tree given to Mary Anne by students of Angling Elementary after their first performance of the UGRR Wax Museum at the Bonine House in May 2012.

Shown is the extensive research Mary Anne did on the families, individuals and churches who were part of the Underground Railroad.  Copies of dissertations and other reference material is also included.  This forms the nucleus of the UGRR Library and Research Room at Bonine House. 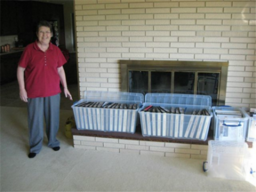 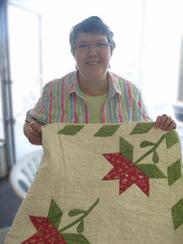 Mary Anne represented the family of descendents of Lot Bonine, James E's brother, in presenting the Bonine Family Quilt to URSCC in the Fall of 2011.  The quilt was made by Susan Donnell Bonine, wife of Lot, in the Carolina Lily pattern.  Lot and Susan's farm was across Penn Rd from James and Sarah, and the two families were often together.  The quilt can be seen in the "Bonine Room" upstairs in the house. 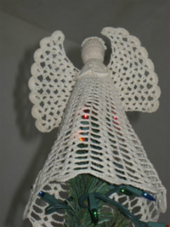 A crocheted angel tops the tree at the top of the tower during Christmas at the Bonine House 2013.  Mary Anne will forever be our angel...

Mary Anne Bonine died on November 28, 2013 after a long fight with leukemia.  She was a member of URSCC since the beginning, authoring our first booklet in 2009 as part of the Education Committee.  She continued on the Committee and was instrumental in bringing the Cass County Underground Railroad Wax Museum to the Bonine House.  Her daughter in law, Stacey Bonine, teaches in Portage.  Mary Anne helped Stacey to bring her class and the concept to us in 2012.  A flowering cherry tree in the front yard given to Mary Anne is a treasured memento of that first performance.

When Sam Adams Elementary in Cassopolis wanted to do their version of the Wax Museum, Mary Anne donated costumes and researched additional local figures involved in the Underground Railroad.  Descendents of many of these characters portrayed them in April, 2013.  From this base, she expanded to creating research binders on almost every family in our area who was connected with the Underground Railroad in some way.  She has given us meticulous research on many, many families--Quaker, Free Black, Freedom Seekers,  and others, all cataloged and housed in binders for each family.  Her research, encompassing thousands of pages, will form the base for our Bonine House Library. She has contributed greatly to preserving the story of the Underground Railroad in Cass County, and her legacy will live forever as each generation learns that story.

Mary Anne was a Bonine by marriage to the late Alan Bonine.  She loved the Bonine House and in his honor, donated $25,000 to us in 2012 for a new roof.  This allowed us to continue with the restoration of the house, plastering, and soon painting the upstairs. She represented the Bonine family in donating the beautiful Bonine Quilt to us in 2011. She thoroughly enjoyed Underground Railroad Days, creating and serving "Ramp Soup" from ramps she collected in her woods. Her wonderful recipe is on urscc.org under Ramptown.

Mary Anne was a fierce abolitionist at heart.  She was a relative of Levi Coffin and recently gave us a beautiful corner cupboard from that family heritage. She was a beloved teacher, and fulfilled that role with URSCC as well.  She was and is an inspiration to all who had the privilege of knowing her, and she will be missed more than words can say.

​Click here to see a video of Mary Anne talking about her research and what URSCC meant to her, filmed Nov. 17, 2013.