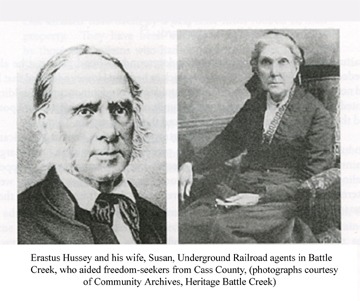 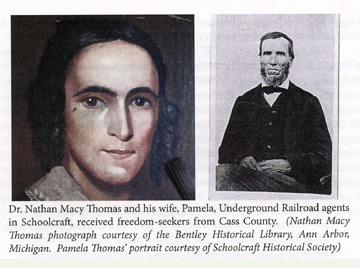 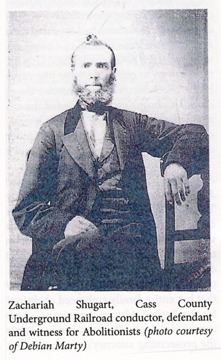 Underground Railroad conductor and Vandalia storekeeper and stationmaster.  During the Kentucky Raid a fugitive family was living in a cabin on Shugart property.  The man was seized, but his wife escaped and alarmed Shugart, who rode to alarm Stephen Bogue.  During the three day hiatus in the trial at the Cassopolis courthouse, Shugart led the ten defendants, as well as about 30 other fugitives, out of Cass County on the UGRR to Dr. Nathan Thomas in Schoolcraft then to Erasmus Hussey in Battle Creek, enraging the Kentucky slave catchers. It is claimed that 1500 freedom seekers came through Cass County on their way to Canada, and Zachariah Shugart was a familiar sight at the head of the train in his trademark white hat and fine team of horses.

He employed freedom seekers, kept records and unwittingly compiled the definitive list of fugitive slaves in his account book "Runaway Negroes" which is  part of the collection at the District Library in Niles MI.

Henry Shepard was a hero of Cass County.  Born into slavery in Virginia in 1818, he was determined to live his life as a free man.  At the age of twenty-one, he risked everything and attempted his dangerous escape. He ran north toward freedom where he was exposed to the cold and freezing temperature of the northern climate. In order to avoid being caught by the slave catchers and the tracking dogs, he hid in a swamp where his feet were injured by severe frost bite.  This condition seriously damaged his feet. Because he could no longer walk or run, he was captured, jailed and returned to his slave owner.

Henry’s recapture was not uncommon.  Most historians believe that during the years prior to the Civil War, approximately 1,000 – 2,000 slaves attempted to escape each year and only 75% actually were successful.  Four million persons remained enslaved in the South with no hope of ever escaping.  Every town in Virginia had special jails to house captured slaves, every newspaper had notices of runaway slaves giving their physical descriptions and their expected destinations. Slave owners were willing to pay large bounties for a healthy, young, male slave like Henry Shepard.  Virginia’s slave auction house was second only in transactions to the one in New Orleans. Henry Shepard could have been sold for a price ranging between $800 and $2,000 dollars (current value $16,000 - $40, 000). One can only assume that Henry was severely punished for his attempted escape, as this was almost always the case.  In addition, Henry’s feet may have been permanently damaged by frost bite. But his will was strong; he was not deterred from his goal. His next attempt was successful and he found freedom in Canada.  While in Canada, Henry must have spoken with other freedom seekers who had escaped through Cass County and their description of this special community must have enticed him to move there.  His true motivation will never be known but the fact the community was home to many free and freed blacks in addition to a large group of strong- minded abolitionists, must have made him feel that the Cass County community would be a relatively safe place to settle and raise a family.

In about 1839 Henry married Martha Barton, a former slave, who was living in Cassopolis, Michigan at the time.  At first the Shepard family lived in Porter Township, and later moved to Penn Township in the Village of Vandalia at the corner of Cambellite (Camplite) and Bogue St.  Although he probably worked as a farm laborer, Henry must have had a good business sense because when he later moved to Covert, he was able to purchase 47 acres of good farmland valued at $4,000 (current value $70,000).

In addition to his life as a farmer, Henry Shepard also had a secret life as a conductor on the Underground Railroad.  He and Zachariah Shugart transported freedom seekers from Cass County to Schoolcraft where Nathan and Pamela Thomas gave them temporary shelter on their way to Canada.  He shared this information with very few trusted abolitionists and had to be secretive in order to protect himself and his family from the ever-present fear of the slave catchers from the South. They came to Michigan armed with the authority provided by the Fugitive Slave Laws of 1793 and 1850.  In 1847 Henry Shepard testified in a Cassopolis Courthouse against a group of slave catchers from Kentucky. They were attempting to retrieve a group of freedom seekers who had found refuge in Cass County. The slave catchers returned to Kentucky empty-handed. This became known as the famous Kentucky Raid of 1847.

It would seem that Henry Shepard might have been satisfied with this contribution to the Underground Railroad, but his strong abolitionist views must have stirred his desire to do even more.  At the age of 46, Henry enlisted in the 1st Michigan Colored Infantry, Company G which later became the 102nd U.S.C.T.  The regiment marched into South Carolina and Georgia where soldiers “maintained the steadiest line of battle and fought with the greatest determination of any troops.” They knew that the future of their families still living in slavery was dependent on the success of the Union Army.

After the war was over Henry returned to Cass County and soon moved to Covert, Michigan where his oldest daughter Elizabeth and her husband William Frank Conner lived.  He and Martha resided there for about seven years before he died at the age of 66.  He was a man of strong conviction and moral courage who chose to act according to what he believed was right even when he had to struggle through almost insurmountable odds.  Henry Shepard was a man of honor and a tribute to his family and his community.

Disciple of John Woolman b. 1720, first Quaker to preach against slavery. As early as the 1770's Quakers began to manumit (liberate from servitude) their slaves. However they had to leave the South, so Quakers began resettling in Ohio, Indiana, Illinois and Michigan, followed by their former slaves. In 1826 forty African American families left North Carolina for Indiana with Quaker escorts. Fifty-four African American families went to Ohio from Virginia with Quaker escorts.

Charles Osborn was born in North Carolina in 1775 and converted to the anti slavery cause. In 1811 he migrated to Tennessee and became a Quaker minister. In 1814 he founded the Tennessee Manumission Society. He then resided in Mt Pleasant, Ohio where he published the first anti-slavery paper in the US.

He moved from Ohio to Wayne County IN, was disqualified from the Meeting and in 1842 moved to Cass County where he started his own Quaker meeting, the Young's Prairie Anti-Slavery Friends. Some of the people from Birch Lake Friends joined the Young's Prairie Anti-Slavery Friends and were disqualified from Birch Lake, due to their differences on slavery. Even though Quakers did not have slaves, some did not want to take an activist role in stopping slavery.

Jefferson Osborn married Martha East. Ellison Osborn married Susanna East. Originally from North Carolina and Virginia, the Easts went from Tennessee to Wayne County IN. Joel East purchased 160 acres of land in Section 1 of Calvin Township in 1832. His father, William East, arrived a year later and settled on 80 acres. His brother, James, bought 160 acres near Birch Lake in Porter township. The East farm was raided and five fugitives captured during the Kentucky Raid. 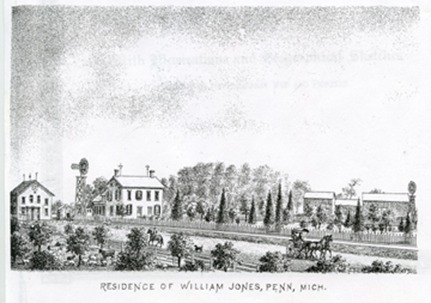 Quaker William Jones was a staunch abolitionist. The Jones house was on the UGRR. One historian notes  "the William Jones house, just outside of Cassopolis, represented a successful 'end of the line' to many on the Underground Railroad".

In Perry Sanford's account of the night of the Kentucky raid, he said Rube Stephens escaped from his cabin onBogue property and ran to Quaker William Jones (less than a mile away) who calmed the situation until Stephen Bogue arrived from Cassopolis with a party of townspeople.

homestead pictured here. This home still stands at Gards Prairie and M60. Lydia died in 1845 and in 1857 William married Maria Parish of Kalamazoo County. He became one of the largest and most successful farmers in the county.

Born in Preble County Ohio in 1813. His father, Charles Jones, married Stephen Bogue's sister Anna, in 1812. Charles Jones came to Cass County in 1829 and built a homestead housing 17 people. He became one of the prominent landowners in Penn township, and died in 1832.

William Jones, son of Charles and Anna Bogue Jones, married Lydia, daughter of Henry Jones in 1834 and purchased the old

Hannah East was born in Virginia in 1798, migrated to Tennessee in 1807, then on to Wayne County, IN in 1816, where she married James Bonine in 1824 becoming mother to James Bogue Bonine. She married Stephen Bogue in 1831 and moved with him to Penn Township.

Quaker Stephen Bogue was one of the founders of the Birch Lake Monthly Meeting, then the Young's Prairie Anti Slavery Meeting. The Bogue house became a well known station on the Underground Railroad, harboring many fugitives on their way to Canada. A stone marker describes it: "This boulder commemorates a station of the Underground Railway used from 1840 to 1850.  It was the home of Stephen Bogue who aided runaway slaves on their way to freedom."  Erected by the Woman's Club of Cassopolis, Michigan 1931.  (Note that Dr. Nathan and Nancy Thomas of Schoolcraft say they received freedomseekers from Cassopolis until 1860.)

In his account of the night of the Kentucky Raid, Perry Sanford says he was staying in one of the Bogue cabins, got out through the roof, alarmed Stephen Bogue and was hidden by Mrs. Bogue in the upstairs of their house.

Stephen Bogue donated land and platted the Village of Vandalia.  He was a much respected member of the community.​

Stephen was born in North Carolina on October 17 1790, youngest of 15 children.

In 1811 the Quaker family immigrated to Preble County, Ohio to escape the institution of slavery. In January 1822 he married Elva Elliott of Wayne County IN. Their daughter Sarah married James E. Bonine in Cass County in 1844. Elva Bogue died in 1828. 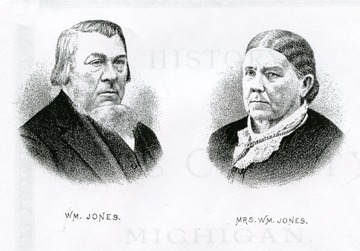 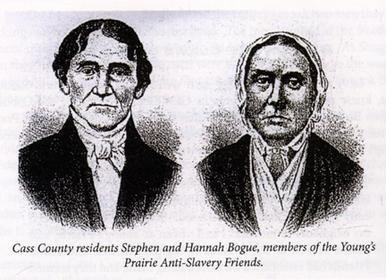 -- Below are some prominent figures in the Cass County Underground Railroad.

Visit the Bonine House UGRR Library for information on many more.