​​A  Bullseye Construction crew of  Mennonite workmen began restoration of the south and east walls last week, installing temporary steel beams and cribbing, to be followed by the installation of massive new perimeter beams.  They say some of the tools they are using are mid 19th century.  Quality Masonry will finish the foundation when the crew has completed their work.

The next steps in the Carriage House restoration are removal of the concrete ‘bunker’ in front, re-roofing, then restoration of the windows, doors and siding.  Finally, the structures in front of the Carriage House will be moved to other locations on the property.  URSCC hopes to complete work by the end of 2018 at a projected cost of $200,000.  When completed, visitors will be able to experience a genuine station on the Underground Railroad, as well as a period museum.

More about URSCC, the Bonine House and Carriage House restorations, and the Underground Railroad in Cass County can be found on www.urscc.org.  Brochures, as well as a 19 site self guided driving tour of UGRR sites in the area, are available outside the Bonine House, the Carriage House, and at Milo Barnes Park in Vandalia.  Tax deductible donations can be sent to URSCC PO Box 124, Vandalia MI  49095 or donate on line at www.urscc.org 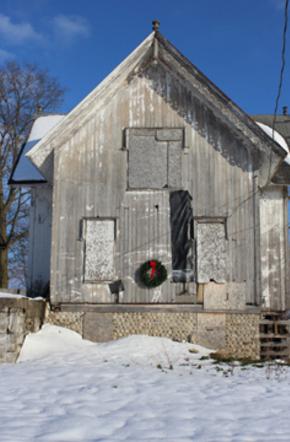 The Underground Railroad Society of Cass County (URSCC) purchased Quaker abolitionists and UGRR stationmasters James E. and Sarah Bogue Bonine’s House and Carriage House on December 29, 2010 and immediately began restoration of the c. 1845 Victorian home on Penn Rd and M-60 in Vandalia MI since it was in imminent danger of collapse.  By late 2014, the Bonine House was stabilized, and URSCC directed restoration efforts to the c. 1850 Gothic Revival Carriage House and Underground Railroad station across the street on Calvin Center Rd and M-60. They hired Bullseye Construction of Vandalia who supported the southwest corner with cribbing, then installed new perimeter beams.  Quality Masonry of Vandalia rebuilt the crumbling foundation in early 2015, fieldstone inside cobblestone outside, stabilizing the building until funds allowed further work.

Perimeter beams are installed on the south wall and east walls.  The original field stone/cobblestone foundation will be restored by Quality Masonry of Vandalia.

The 1940's cement foundation is excavated and a new four foot deep trench dug by Cripps Excavation of Marcellus.  A new footing is poured and an Amish crew constructs the foundation wall.

Bullseye Construction of Vandalia resumes the restoration of the Bonine Carriage House.  A Mennonite crew takes down the old, deteriorated beams and prepares new perimeter beams 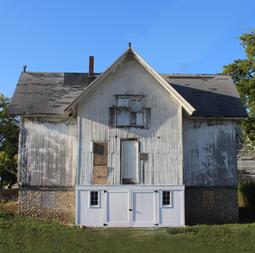 Barn door "bump-out' extension sided by a crew from Bullseye Construction. Barn doors are built on site and installed.  Area is graded in preparation for seeding.

Foundation restoration begins on the southeast and east walls, fieldstone inside, cobblestone outside, by Quality Masonry of Vandalia. 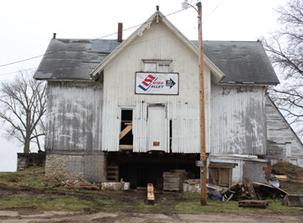