"And the Beat Goes On"

URSCC Fiscal Year from its founding has been from 9/1 to 8/31 and every year we hold our Annual Meeting shortly after.  In 2015 the Board decided to change to a calendar year accounting system, therefore future Annual Meetings will be in January.

All members are invited, year- end reports and wrap ups from the Officers and Committee chairs are read, and in odd years, a new Board of Directors is elected. There is dessert and coffee, and since our second Annual Meeting, there have been powerpoint presentations highlighting events and activities of the year.  While these photos can be seen in other places on this website, it is fun to see them in one place for each year.  Enjoy. 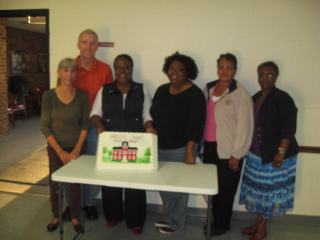 The celebration cake portrays the theme of the meeting. 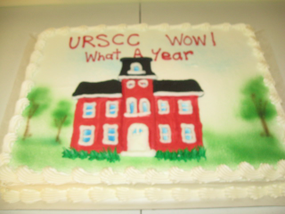 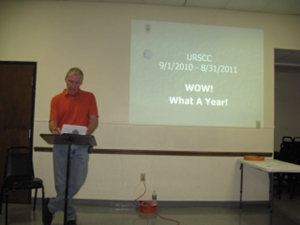 The Underground Railroad Society of Cass County (URSCC) held its second Annual Meeting on September 21, 2011 to celebrate a successful year, as well as to elect a new Board of Directors for FY 2012-2013.  URSCC members entered Vandalia Village Hall to a powerpoint screen proclaiming the theme "Wow--What a Year!" as well as a cake decorated with the same message.

"URSCC Wow! What a Year