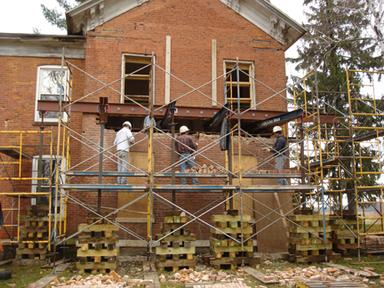 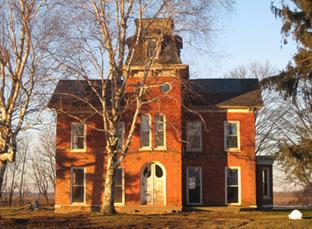 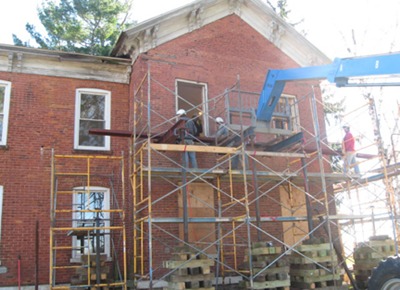 Southwest corner of the Bonine House after the repair 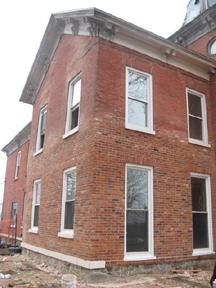 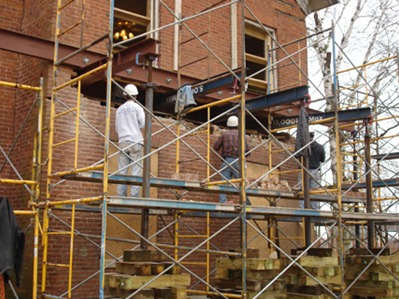 Mike Moroz, president of URSCC and Building and Grounds chair, describes the process currently underway as "temporarily supporting the upper portion of the corner by sandwiching the existing walls with steel beams and supporting them. Then comes the painstaking task of dismantling the crumbling walls, one brick at a time, and removing the foundation. Next is reconstructing the foundation and rebuilding the brick walls, using original salvaged brick along with mortar and methods of masonry construction appropriate to the historic nature of the Bonine House, while leveling the first and second floors. When completed, the facade will be restored to a stable condition and close to its 1870"s appearance.

​Experts have determined that the James E. Bonine House was actually constructed during two different eras. The original house was built in the mid-1840's as a simple four room Greek Revival common to this area. After the Civil War, the house underwent extensive remodeling in the Second Empire style, popular in Paris between 1860 and 1880, adding the tower with its mansard roof, and an addition to the back that included the dining room, kitchen and parlor downstairs as well as four bedrooms upstairs. Moroz notes that funding for these restoration projects is being sought from a variety of sources, and asks everyone to become a part of the legacy of the Bonine House and Carriage House by giving as generously as possible. Tax-deductible donations can be sent by mail to URSCC P.O. Box 124, Vandalia MI 49095 or donate online at www.urscc.org. He requests that all remember the Bonine House and URSCC in planned and charitable giving. URSCC can be contacted online at urscc.org or at 269-445-7358.

Building Restoration, Inc of Kalamazoo is handling this technically difficult piece of the overall restoration project. Tom Nehil of Nehil-Sivak, structural engineers, calls the task of supporting the second floor, while dismantling the 12 inch thick brick walls of the first floor as "more difficult than meets the eye. The shoring needs to be strong and secure enough to hold up the walls and roof safely while men work underneath, and at the same time be capable of raising the southwest corner back to level and gently easing the distorted west wall back to plumb. The age and deteriorated condition of the brick and stone make supporting this historic structure a delicate business, requiring careful consideration of conditions during the repair process." 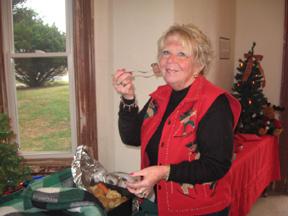 The Underground Railroad Society of Cass County (URSCC) is pleased to announce the completion of Phase One of the restoration of the historic Underground Railroad landmark Bonine House in Vandalia, MI. Building Restoration, Inc. of Kalamazoo completed the work on the southwest corner of the house, repairing the deteriorating walls and foundation. The delicate, hazardous restoration began in late October and was finished the last week in December. Photos of the repair can be seen below.

The Bonine House with the Southwest corner restoration complete (Dec. 2011) 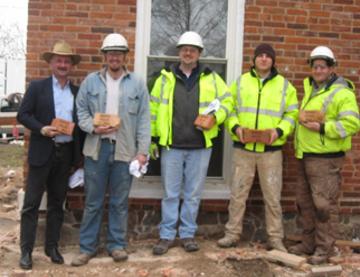 Kathy Ruple samples the wonderful pot roast she made and served to the Building Restoration crew at a thank you lunch from URSCC on Tuesday, December 20th.

A thank you lunch was prepared on Tuesday, December 20th by members of URSCC, coordinated by Kathy Ruple, Events chair, to thank the crew for a job well done, and for their unfailing cooperation and courtesy throughout the project.

The Underground Railroad Society of Cass County (URSCC) is pleased to announce that the restoration of the southwest corner of the original 1840's Greek Revival portion of the James E. Bonine House at the corner of Penn Rd. and M60 has begun.

Phase Two will begin in the Spring. Goals for 2012 are restoration of the tower and re-roofing of the Bonine House, as well as structural work on the Carriage House at the corner of Calvin Center Road and M-60. Interior work at the Bonine House is ongoing.

Information on URSCC and the Bonine House can be found at the donation sign at the corner of Penn Rd and M60 or the historic marker in Vandalia, as well as on www.urscc.org. Much needed tax deductible donations can be sent to URSCC PO Box 124, Vandalia, MI 49095 or donate online at urscc.org.

The work on the southwest corner is projected to be substantially completed by the end of the year. Subsequent phases include additional exterior masonry repair, restoration of the tower and re-roofing of the entire Bonine House and structural repair and restoration of the 1850's Gothic Revival Carriage House across the street at the corner of M60 and Calvin Center Road.

The Bonine House will become a UGRR education and community events center. The Carriage House will be used as a museum and education center as well as a community events location. Both buildings will act as focal points for UGRR activity in the area, attracting UGRR enthusiasts from around the world. There is currently a self guided tour that highlights many other UGRR sites in the area, available at the historic marker in Milo Barnes Park in Vandalia.